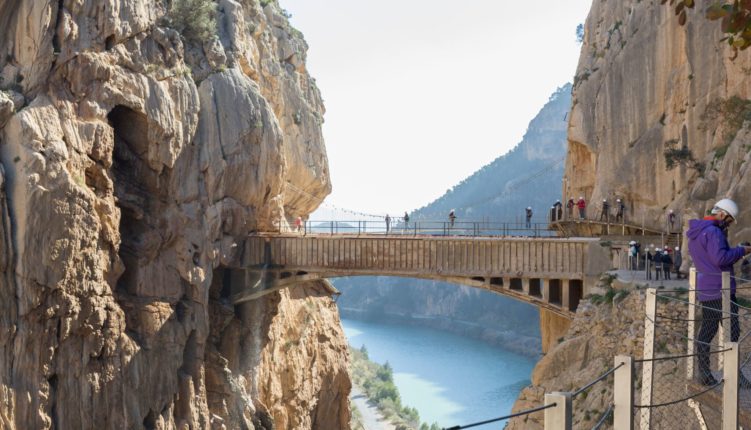 El Caminito del Rey is now open for the enjoyment of all fresh air lovers and adventurers.
The route is 8,5 kilometres long, reopens after 20 years of reforms.

From 28th March 2015, it is possible to visit the route, and from 3rd March 2015 you can order tickets and they are free for the next six months.

The Gorge Desfiladero de los Gaitanes is a natural beauty spot, placed in the centre of the province, between the towns of Alora, Antequera and Ardales. This is one of the most beautiful spots of the Malaga Mountains. Between its steep and considerably high walls, the River Guadalhorce flows, after having passed through the reservoirs El Chorro (The Spurt), Guadalhorce, Guadalteba and Gaitanejo.

The Gaitanes Gorge is a canyon, carved by the river Guadalhorce in the territory of Álora, which at some points is only 10 meters wide and 700 meters deep. The nothern access to it is via Guadalhorce reservoirs and the southern is via El Chorro.

The construction of a water channel from the reservoirs in the north to El Chorro, which was meant to make the most of the slope in a hydroelectric power station, was carried out together with a path for maintaining the channel. This one is known as El Caminito del Rey Path (The Kings’s Little Pathway) because it was first opened by King Alfonso XIII. This path, about 3 kilometers long, has just been refurbished, and it goes along vertical walls and a footbridge over the gorge on the same waterway.

Until the arrival of the High Speed Train (AVE), the gorge was the only rail access to Málaga from the inland part of Andalusia, with a long tunnel in the east wall of the gorge. Today, there is another tunnel located one kilometer east, under Huma Mountain, used as an access by high-speed rail.

Tickets can be booked at this link, where you can also get more information about driving directions, timetables and much more: www.caminitodelrey.info/en/#1